A little more than 10 years ago, Duke Energy employee Amber Cason adopted Ruby, a Staffordshire dachshund mix with a dash of Weimaraner. Walking through rows of kennels at the Humane Society, Cason spotted the reddish six-month-old New Jersey transplant. 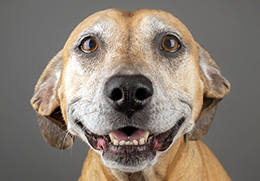 Ruby, a 10-year-old Staffordshire dachshund mix with a dash of Weimaraner, and animals like her can benefit from The Power of Giving program. Duke Energy will match, dollar-for-dollar, donations made by employees to the causes of their choice.

“She had been moved to the Humane Society about three weeks before from another shelter,” said Cason, recounting Ruby’s plight of homelessness in a new state. “The shelter she was in before hadn’t had much success in finding her a home, and so there she sat.”

Until Cason took her home.

Ruby was no longer alone, and Cason gained a loyal companion. Cason also had her eyes opened to the desperate reality of animal shelters in her community. The Humane Society needed additional financial support. The cost of supplies and daily care of the animals was increasing, but funding was dropping. That’s why Cason participates each year in the Duke Energy Power of Giving campaign and donates in honor of Ruby to the Humane Society.

The Power of Giving campaign empowers employees to support the causes of their choice and have their donations matched dollar for dollar, with a cap, by the Duke Energy Foundation – nearly doubling the impact employees can make in their community.

This year, employees contributed $5.2 million in support for an array of causes, from the arts and animal welfare to combating hunger and curing disease. Combined with the Foundation matching gifts and special events, that’s nearly $10 million in funding to support our communities. Now that is powerful.